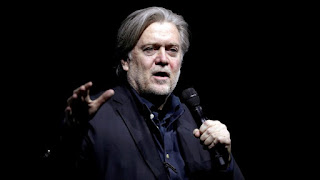 Ahead of the 2014 European Parliament elections, he travelled through the British countryside with Nigel Farage, who was head of the UK Independence Party (UKIP) at the time. Back then, Bannon didn't know European elections existed. What surprised him even more: that a largely unknown person like Nigel Farage was able to get 24 seats in European Parliament. "Suddenly, he had political power," Bannon says.

The Englishman showed Bannon what Europe, in his view, actually was: a pile of bureaucrats who are destroying England. On the phone, Farage says it was fun going to the pubs with Bannon. "We did what most politicians don't do anymore. We went to see ordinary folks."

Is it true that Bannon wants to hire him as a paid advisor? "Nothing has been signed yet," Farage says.

Dreams of Destroying the State

In the afternoon, Raheem Kassam steps out into the inner courtyard and takes a deep drag from his American Spirit. He seems exhausted. He is only 32, but Europe is his third battle, following Brexit and Breitbart, whose London office he led. His home is in Washington, but he essentially lives on an airplane. Bannon wants Kassam to be present at most conversations, but earlier, Kassam had excused himself and collapsed onto his hotel bed, his head whirring. He lay there for a mere 15 minutes before a text message from his boss jolted him awake.

"All the right-wing guys in Europe want is to get control of the state. That's the main difference to us in the U.S.," Bannon says. "Their statism is so imbued into the public consciousness. Salvini and these guys in Italy want to win elections in order to get their hands on the control of the Italian state and then bend it to their will." He says the same is true of the AfD and of the Rassemblement National. Unfortunately, he says, nobody has come up with the idea of destroying the state itself.

He continues his search for vessels, but it isn't easy. He wants war, and nobody is biting. In an interview in July, Jörg Meuthen of the AfD said his party doesn't need any "coaching from outside the EU." In early October, Marine Le Pen felt it necessary to distance herself from Bannon, together with Italian right-wing populist Matteo Salvini. Only Europeans, she said, should save Europe.

Not all right-wing populists like it when an American tells them what to do. They are currently working on uniting the right-wing parties in European Parliament into a single parliamentary group. The last thing they need is an incendiary from Washington to meddle in their plans. Bannon says he needs to sit down for a coffee with Meuthen.

The AfD, by contrast, appears to have no such qualms. Sven von Storch, husband of Beatrix von Storch, a prominent German parliamentarian from the AfD, travelled to Rome in September to meet with Bannon. The American firebrand also regularly speaks with AfD co-leader Weidel. The previous week he once again flew to Paris to meet Le Pen. They agreed on a compromise: Bannon affirmed that he would stay out of the European Parliament election, but that he would offer the populists "technical help," which, according to a leading member of the Rassemblement National, they would naturally accept.

For the moment, it seems as though Bannon is destroying things more than he is building them.

There are, though, also people sitting not so far from the center of Europe who still worship Bannon. Mischaël Modrikamen's home is located on a hill outside Brussels, surrounded by chestnut and beech trees. An iron gate opens and Rudi, the chauffeur, can be seen in the driveway with a vacuum, cleaning the Mercedes. A moment later, the man of the house enters the entry hall, dressed in a blazer and tie, with a blue pocket square.

A Club, Nothing More

"Breakfast?" Modrikamen asks.
It's a pleasant place to talk about the right-wing revolution. Outside, the sun glints on the pool while inside, the maid busies herself putting out bowls with carefully cut apple and banana slices. Modrikamen was born to a Jewish mechanic in Poland, studied law, obtained huge settlements for small savers and became wealthy. He rose through the ranks, becoming part of his country's elite and decided to try his hand at politics. But he was laughed at by the establishment and ignored -- before suddenly seeing a very similar type of man make it into the White House.

In January 2017, shortly before the inauguration of U.S. President Donald Trump, Modrikamen launched a foundation in Brussels called "The Movement." Its goal is to unite the European rightwing. "It is to be a club, nothing more," says Modrikamen in his French accent.

Modrikamen spent a long time trying to catch Bannon's eye, and it was Nigel Farage who ultimately helped him secure a meeting in July. Bannon said he would become involved if he could be the boss and Modrikamen couldn't believe his luck. "Steve and I understand each other blindly. We think alike. I can finish his sentences for him."

These days, Modrikamen answers questions almost daily from foreign media. The previous day, it was a film crew from VICE waiting for him at the airport. The Belgian tells most journalists the same story: That because he is a part of the establishment he knows how corrupt it is. That is why he is now fighting for the common folk. Essentially, though, he and Bannon are fighting for the exact same thing: themselves.

Modrikamen says his club wants to offer services to members in advance of the European election: a forum for exchanges, polls and experts as well as a situation center that responds to events, sends out position statements and places right-wing talking heads on talk shows. "We don't have to teach Salvini or Orban how to win elections," he says. "But smaller parties will be happy to have the support."

He climbs the stairs to the top floor. His right-wing nationalist Parti Populaire party is headquartered directly above his bedroom. A secretary, a financial expert and three political strategists are there, along with three stocky men staring into their computers -- the IT department. They all work in the 200-square-meter (2000-square-foot) space. There is even a billiards room. He says he plans to modify two or three offices for The Movement. He runs his fingers along the billiards table. It might soon have to go -- to make room for Bannon.

It's not clear where the money for the club is coming from. Modrikamen says the staffing costs for the 10 to 12 employees are negligible, with the only real expensive part being the surveys and the analysts needed to interpret them. He himself won't invest a penny, he says, adding that he has already put plenty of time into the project.

When asked about it later, Bannon says: "Money isn't an issue." There are several billionaires in Europe who are willing to provide their support, he insists. But he declines to name any names.

Next Target: The Vatican

It's late September and Bannon is sitting in British Airways business class. He has agreed to fly from Rome to Los Angeles for a 10-minute appearance on a TV show. Bannon said, "I'll probably get my teeth kicked in, but whatever. Sharpens the blade."

From L.A., he flies back to Washington for a dinner he has organized at his home, The Embassy, for conservative Catholics. Think-tank employees show up along with former Trump advisors, TV host Laura Ingraham, bankers, the German socialite and conservative activist Gloria Princess of Thurn und Taxis as well as Cardinal Gerhard Ludwig Müller, the former bishop of Regensburg. Müller served as prefect of the Congregation for the Doctrine of the Faith (CDF) for five years until Pope Francis replaced him. Another man who was spit out, like Bannon, Farage, Modrikamen and all the rest.

Bannon says he intends to establish a right-wing populist think tank south of Rome in an old convent. But because the convent requires renovations, he stumbled across St. Emmeram's Abbey in Regensburg on the search for a temporary home. The abbey belongs to the Thurn und Taxis family. "We could start with seminars in spring next year. I want to talk about media," Bannon says.

In early October, he walks out of a TV studio in New York, where he was working on a film series about the consequences of digitalization. It's focus was the downfall of humanity; it's only the big issues for Bannon. An SUV the size of a small tank is waiting outside, having been organized by his nephew. "Do we get the SPIEGEL cover?" Sean asks.

Bannon climbs into the open rear door. While the driver snakes through New York's afternoon traffic, Bannon ponders the future of the Catholic church. Like many other institutions, he says, the Vatican has been infiltrated by the left in recent decades. Bannon wants to bring the church back to its beginnings, ideally back to the Middle Ages. He would like to tear down the Vatican just as he wants to do with the modern administrative state.

When asked how he reconciles his Catholic faith with his three divorces, he says: "According to the church I was never married. My first marriage was annulled. Then I was married twice outside the church and got civil divorces -- so this doesn't count."

Maybe there's not much else to say. Bannon has been sidelined, as he well knows himself -- like a director trying to recreate his greatest hit. He doesn't care if he is causing confusion in Europe. What's important, he says, is the "camaraderie" among like-minded people. His favorite quote comes from the 17th century poem "Paradise Lost" by John Milton: "Better to reign in Hell than serve in Heaven."

His plan to push Europe to the right remains vague. He talks a lot and does little. The movement is currently made up of Bannon's exhausted staff and Modrikamen's billiard room. For the most part, he has financed his revolution with his own money -- the flights, the hotels, the assistants and Darren, the British bodyguard. "One-and-a-half-million dollars, or two million." That, he says, is how much it has cost so far. But he is using that money to buy himself an important good: attention.

In an email, Thurn und Taxis describes Bannon's plan as "brave." She writes: "I welcome anything that makes election campaigns, especially the EU elections campaign, more colorful and exciting." Nevertheless, she declines to allow Bannon the use of her castle for his think tank. "St. Emmeram is certainly not available."

Bannon, though, seems to have long since found his next mission. The Vatican. He says he is impressed by Cardinal Müller. A heavy-set man, around 180 centimeters (6 feet) tall, good charisma, strong presence. "Would be a fantastic pope," Bannon says. He looks out the window. Central Park rushes by outside. Yes, he says, Müller is telegenic. Almost like Trump.

Part 1: Searching in Europe for Glory Days Gone By