∆∆∆ The inescapable anti-Semitism of Western nationalists, by Ishaan Tharoor | 28 février 2018 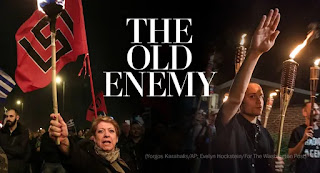 Want smart analysis of the most important news in your inbox every weekday along with other global reads, interesting ideas and opinions to know?

Readers of Today's WorldView are well aware of how the far right has gone mainstream over the past year. They were brought there by a confluence of events: President Trump's rise to the White House on an ultranationalist platform, the electoral gains made by once-fringe parties in Western Europe and the deepening illiberalism of parties in power farther east. As a result, we've seen a rise in Islamophobia as well as widespread demonization of immigrants in various countries.

But this resurgent nativism also encompasses an old and dark tradition: a virulent hatred of Jews

You could see it in last year's infamous white-nationalist rally in Charlottesville, where hundreds - inspired in part by Trump's politics - chanted “Jews will not replace us.” ( The president decries anti-Semitism, but had a notoriously tough time denouncing the neo-Nazi marchers. ) You could see it in the sly game played by Poland's ruling party, which has moved to criminalize discussion of Poland's role in the Holocaust while looking the other way during a nationalist demonstration in November where supporters chanted “Pure Poland, Jew-Free Poland.” And you could even see it in the hideous slaughter of 17 high school students in Florida this month - the shooter's magazines were reportedly etched with swastikas.

A new study by the Anti-Defamation League, a U.S.-based organization that tracks anti-Semitism and other bigotry, found an alarming rise in anti-Semitic incidents in 2017. “The ADL’s 2017 Audit of Anti-Semitic Incidents identified 1,986 examples of anti-Semitic harassment, vandalism and assault in 2017, the largest single-year increase and the second-highest number since it started tracking the data in the 1970s,” my colleague Tara Bahrampour reported. “Vandalism was up by 86 percent, and incidents targeting Jewish schools, community centers, museums and synagogues had surged by 101 percent since 2016, the report found. The number of anti-Semitic incidents in K-12 schools has roughly doubled each year for the past two years, the report said.”

“This is close to an all-time high,” Jonathan Greenblatt, the organization’s CEO, said to The Washington Post, adding that the last time the number of incidents was so high was nearly 25 years ago. He blamed the shift on “the divisive state of our national discourse” in the Trump era. “We’re living in a time where extremists feel emboldened and they’re increasingly taking action,” he said. “They feel empowered. They almost feel like they’ve been mainstreamed.”

Another report that the organization published in late January pointed to a surge in white-supremacist propaganda on American college campuses. And while countless politicians and talking heads moan about leftist political correctness at America's universities, far fewer seem concerned about this troubling uptick.

On the other side of the Atlantic, the trend lines are perhaps all the more worrying

In Germany, the far-right AfD party has become the largest opposition bloc in Parliament. It carries a toxic legacy of anti-Semitism and includes a host of politicians who are tired of apologizing for Germany's Nazi past. Xenophobic far-right parties across the continent - from France to Austria to Slovakia - have all risen to prominence (and, in some instances, to power) while engaging in what could arguably be seen as anti-Semitic demagoguery. Hungarian Prime Minister Viktor Orban's relentless campaign against Jewish American financier George Soros offers a striking case in point.

A common theme in their messaging is populist contempt for “globalism” - for well-heeled intellectuals, aloof bureaucrats and jet-setting business executives whose interests and beliefs somehow betray the nation. This distaste for “cosmopolitanism” is hardly new for Europe and, of course, is intertwined with a long history of anti-Semitic tropes.

Perhaps nowhere has the problem resurfaced more than in Poland, where critics say the governing Law and Justice Party is steering the country toward a majoritarian autocracy. That government passed a controversial new law this month on how the Holocaust is remembered, making it illegal to speak of Polish complicity in the genocide. The law chilled discussion of Poland's past at home and stirred outrage abroad, but Polish leaders have staunchly defended it.

At the high-profile Munich Security Conference this month, Polish Prime Minister Mateusz Morawiecki drew the ire of onlookers when he seemed to put equal blame on Jewish collaborators for the Nazi-sponsored genocide that wiped out millions of European Jews.

The “Holocaust law” has sparked a diplomatic battle with Israel and created new fears among the country's Jews. Although Poland once had Europe's largest Jewish community, fewer than 10,000 now live there. Anna Chipczyńska, the president of the Warsaw Jewish community, told my colleague James McAuley that the resurgent nationalist mood has led to Jewish organizations being flooded with hate mail. She suggested that some Polish Jews may consider hiding their cultural identity.

“They might see a stigma,” Chipczyńska said. “And therefore there is a legitimate risk that people will hide and cover their identities, their backgrounds. It’s extremely concerning.”
Such a scenario is, of course, not something American Jews have to worry about. But the mobilization and growing visibility of the American far right is a major concern. “They’ve dropped the boots in favor of suits; they’ve dropped the camos in favor of khakis; they talk about white culture and supporting policies like ending immigration,” Goldblatt of the ADL told The Post.

And that’s just what’s visible to the outside world. The Southern Poverty Law Center, which tracks right-wing hate groups in the United States, recently released its own report on the surge in neo-Nazi mobilization in the country. Heidi Beirich, director of the SPLC’s Intelligence Project, told Bahrampour that the organization's research barely scratches the surface of what may be happening.

“We’re in an ugly time,” she said. “We’re not even close to capturing even one-tenth.”

Want smart analysis of the most important news in your inbox every weekday along with other global reads, interesting ideas and opinions to know? Sign up for the Today’s WorldView newsletter.