The European security architecture does not resemble a Le Corbusier or Oscar Niemeyer design. It is not a neatly planned whole in which every component elegantly and effectively fulfils a specific function. It rather resembles a sprawling palace complex, with every successive occupant adding, restyling or abandoning another wing.

It functions, but one would never build it like that if one were to start from scratch. The debate about how to organize, and to fund, the European security architecture has flared up again since the European Union (EU) in its 2016 Global Strategyset itself the objective of achieving strategic autonomy in security and defense… 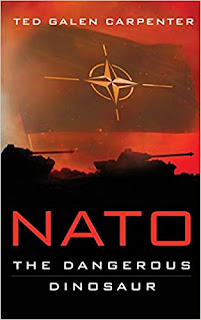 Donald Trump’s presidency has triggered a growing debate on both sides of the Atlantic about the future of the North Atlantic Treaty Organization (NATO) and U.S. policy regarding the alliance.

In NATO: The Dangerous Dinosaur, Ted Galen Carpenter outlines how NATO in its current form has outlived its purpose, and burden sharing is only part of the problem.

Continuing to expand NATO eastward, encroaching on Russia, will only endanger the alliance.