The dangers of illiberal liberalism, by CLAIRE FOX | The Economist Aug 17th 2018 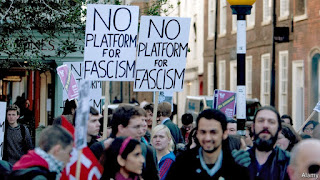 If ever there was a vivid illustration of illiberal liberalism, it was the response to one of the essays in this very series. After The Economist published an article by Kathleen Stock, reader in philosophy at the University of Sussex, which sensitively questioned whether “self-declaration alone could reasonably be the only criterion of being trans”, the Sussex Students’ Union denounced her as a transphobe. In the union's original statement, it declared “we will not tolerate hate on our campus.”

"Trans and non-binary lives are not a debate.”

These key tropes - “we will not tolerate” and “this is not a debate” - are now frequently deployed to curtail discussion of issues deemed to be taboo, invariably to “protect” people deemed vulnerable from speech deemed hateful. This secular version of blasphemy follows a sacred script, written by those who consider themselves liberals. Dare to query it and you’ll be damned.

I still consider myself a liberal in the Enlightenment sense of the word. But I have to admit that being a liberal these days is confusing. I continue to take inspiration from John Locke, John Stuart Mill and those more recent freedom fighters of the 1960s who challenged conformism and repression. In Britain this led to partial decriminalisation of both homosexuality and abortion in 1967, and a more open, tolerant, permissive society. These are the liberal values which I recognise and admire.

In contrast, today’s so-called progressive liberals are often intolerant, calling for official censure against anyone perceived as uttering non-progressive views. They openly despise everyone from Trump-voting “Deplorables” and Brexit-voting ”Gammons” (those “others” who dare to vote the wrong way and won’t espouse their “tolerant” values) to those in their own ranks who refuse to toe the liberal line. Many will have noticed the murky civil war among feminists on the transgender issue, or the venom heaped on anyone daring to demur on 100% endorsement of the #MeToo movement. Prominent women, many of whom would call themselves liberal feminists, have been turned on and accused of treason for daring to dissent.

Margaret Atwood’s thoughtful article, “Am I a Bad Feminist?”, was met with howls of rage from fellow feminists. The iconic novelist was accused of being a victim-blaming rape apologist, all of which apparently stemmed from her “white privilege”. Ironically, Ms Atwood’s essay notes that “anyone who doesn’t puppet their views is seen as an apostate, a heretic or a traitor”. How right she is. After Catherine Deneuve wrote an open letter raising concerns about the effect #MeToo might have on flirting, Asia Argento, also an actress, denounced her and “other French women” for their “interiorised misogyny [which] has lobotomised them to the point of no return”. For daring to raise questions about female sexual agency, Ms Deneuve and others have essentially been told that they’ve been brainwashed.

This particular viciousness is also aimed at liberals who dare any self-criticism. Mark Lilla, a professor of humanities at Columbia University, published a stinging rebuke of his own tribe for facilitating Donald Trump’s accession to the White House. His New York Times op-ed, “The End of Identity Liberalism” went viral, and received a savaging from his peers. Katherine Franke, a colleague of his at Columbia, accused him of “contributing to the same ideological project”’ as David Duke, a former leader of the Ku Klux Klan. “Both men are underwriting the whitening of American nationalism”, Ms Franke writes “Lilla’s op-ed does the…nefarious background work of making white supremacy respectable”. Such delegitimising slander is commonplace - it’s the liberals’ version of hate speech, spouted without apology in the fight against (ahem) hate speech.

Mr Lilla wants to save liberalism from illiberal identity politics. He writes, “American liberalism… has slipped into a kind of moral panic about racial, gender and sexual identity that has distorted liberalism’s message and prevented it from becoming a unifying force capable of governing.” He has a point, but I am less concerned with rescuing liberalism as a governing ideology than with saving one of its most valuable tenets: free speech, which is too often an inconvenient obstacle to righteousness.

Free speech is carelessly tossed to one side in order to silence views and people that liberals label as intolerant. In a shocking turnaround, the American Civil Liberties Union has recently abandoned its liberal, even-handed attitude to which free-speech cases it will defend. Its new guidelines, titled “Conflicts Between Competing Values or Priorities”, explicitly endorses the view that free speech can harm “marginalised” groups. “Speech that denigrates such groups can inflict serious harms,” it says, “and is intended to, and often will, impede progress toward equality.”

This reflects one of the ways in which liberals have let their guard down on free speech. They have bought into an expanded, subjective definition of harm that incorporates the alleged psychological distress caused by speech. To compound matters, the contemporary fashion for viewing the politically oppressed as defenceless, vulnerable victims has led to a downgrading of free-expression principles in order to protect those marginalised minorities from offence.

Some liberals also see free speech as a Trojan horse for alt-right bigotry. Commentators such as Owen Jones dismiss those fighting censorious trends as “right-wing, well-heeled, white, straight, male commentators… bigots who clothe themselves in the garb of free speech [but]…just want the right to hate without challenge.” And yet, this is partly due to liberal cowardice. A cursory look at coverage of the so-called “Free Tommy” brigade, centred around the alleged censorship of Tommy Robinson, a notorious anti-Islam campaigner, reveals how liberals shun defending the free-speech rights of the unpalatable. Yes, I find many of Mr Robinson’s views odious, but a pick’n’mix attitude to free speech betrays liberalism, not Mr Robinson, and worse, it adds to the myth that “free speech” is a “right-wing” cause.

In a much-cited essay entitled “The free speech panic: how the right concocted a crisis’” Will Davies muses: “The intriguing question is why free speech has become such a cherished value for conservatives?” Perhaps a better question would be: Why is free speech no longer “a cherished value” on the liberal left? Surely one reason is that liberals fear being denounced by commentators such as Mr Davies, who suggests that “free speech warriors” are self-serving, handmaidens of the alt-right. Another Guardian columnist, Nesrine Malik, has decided that ”freedom of speech is no longer a value. It has become a loophole exploited with impunity by trolls, racists and ethnic cleansing advocates”. Those who cannot so easily be dismissed as bigots, perhaps civil libertarian liberals, are sneeringly dismissed as “Free Speech Grifters - who flog PC culture as a singularly eminent threat to the freedom of expression.”

This liberal cynicism about the motives of those who espouse free speech can in turn warp their sense of tolerance of others. Afua Hirsch, a British writer and ex-barrister, suggests that “the culture war, so often dressed up as a battle over free speech, in reality boils down to a refusal to engage with alternative points of view.” I couldn’t agree more. However, with no sense of irony, Ms Hirsch goes on to decry the “fantasy” of free speech in which those worried about the “threat of immigration” are ascribed the worst possible motives. Ms Hirsch accuses them of using “sanitised language…to dress up vicious attitudes.”

But if an alternative view to Ms Hirsch’s on immigration (and indeed my own) is castigated as prettifying explicit racist abuse, what hope is there of an inclusive liberal political culture? This between-the-lines reading of political opinions that liberals denounce as a hateful intolerance lacks generosity or empathy. It tells us far more about the smug, closed-minded certainty of illiberal liberals than those they look down on. In fact, liberals will only become liberal again once they abandon this type of sneering and smearing and recognise that free speech - even for those we despise - is the core liberal project. Without it, the much feared (often exaggerated) rise of the far-right won’t be the biggest threat to our freedoms. Instead, illiberalism, in the name of liberalism, will be the PC midwife of authoritarianism.

Claire Fox is the director of the Academy of Ideas, a libertarian think-tank, and regularly appears as a pundit on the BBC and other news channels. Her most recent book, I STILL Find That Offensive! (Biteback, 2018) is out now.