Globalisation: the rise and fall of an idea that swept the world, by Nikil Saval | The Gardian's long read Fri 14 Jul 2017 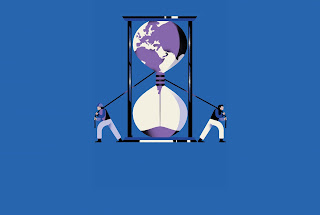 [...] The future of economic globalisation, for which the Davos men and women see themselves as caretakers, had been shaken by a series of political earthquakes. “Globalisation” can mean many things, but what lay in particular doubt was the long-advanced project of increasing free trade in goods across borders. The previous summer, Britain had voted to leave the largest trading bloc in the world. In November, the unexpected victory of Donald Trump, who vowed to withdraw from major trade deals, appeared to jeopardise the trading relationships of the world’s richest country. Forthcoming elections in France and Germany suddenly seemed to bear the possibility of anti-globalisation parties garnering better results than ever before. The barbarians weren’t at the gates to the ski-lifts yet – but they weren’t very far. [...]